This Is What The 2022 Toyota Tundra Will Look Like 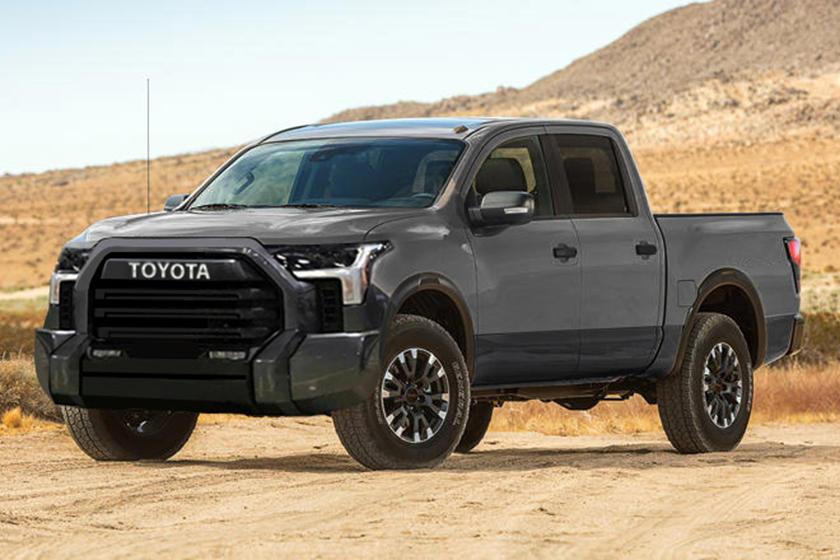 This Is What The 2022 Toyota Tundra Will Look Like

5 hours ago by Karl Furlong Trucks

Toyota's truck will sport an angrier face than before.

A leaked image of what could very well be an all-new Toyota Tundra recently surfaced online. Although not much could be seen, the shape of the front daytime running lights hints at a design that could be a radical departure from the dated current model. As usual following a leak of this nature, another render artist has come to the rescue and envisioned what the 2022 Tundra could look like based on this leak. The render was shared on the website Carsbite, showing off a brasher styling job when compared to the existing truck.

In front, the commonalities between old and new don't go beyond the TOYOTA name on the nose. The new one has a much larger grille in black with a chunky surround in gray. The grille itself has thick horizontal bars for a powerful, although not especially attractive, look. Those T-shaped LED daytime running lights are quite a departure from the current model as well. Along the sides, there is much less to capture your attention, with typically large wheel arches, although the ones here are more rounded than on the current Tundra. While Toyota has made some welcome upgrades to the Tundra for the 2021 model year, there is no doubt that it's time for the truck to be replaced by an all-new model.

Although the Tundra is a commendably dependable truck, rivals like the Ford F-150 and the Ram 1500 are far more sophisticated inside and a lot more comfortable to live with, whether they're on a construction site or hauling the family across the country. Rumors indicate that the next generation of the Tundra could make an appearance sometime next year and receive a powerful hybrid powertrain that could produce up to 450 horsepower, which it will need to remain competitive with the F-150 hybrid. Hopefully, the latest spy shots are a sign that the new Tundra isn't too far from a full unveiling.