Review: The 2021 Toyota Land Cruiser Heritage Edition Is A Rugged Nod To A Bygone Age 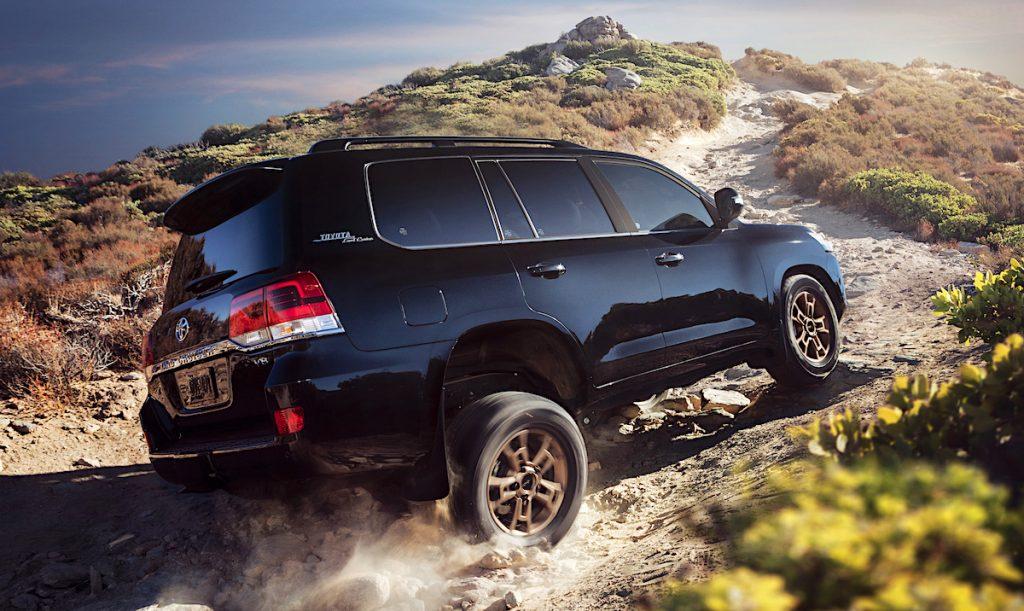 Times are changing, and many people say they want more economical and affordable SUVs. So what would you say about a big SUV in 2021 that costs nearly $90,000 and only gets an estimated 13 mpg in town and 17 mpg on highways? “Oh, you must be talking about a Toyota Land Cruiser!”, I hear you reply. Those are two headlines for the 2021 Toyota Land Cruiser Heritage Edition.

This SUV starts at $87,030 with destination included. Toyota sold only 3,147 Land Cruisers last year, indeed to folks who knew exactly what they were getting.

They bypassed other decent, far more affordable Toyota SUVs such as the RAV4, which found 430,387 buyers and got the big, somewhat cumbersome Land Cruiser instead. The Heritage Edition debuted last year as not just a nod to the model’s history, but essentially just a more upscale trim model.

From the start, Land Cruisers earned their rugged reputation for tacking seemingly impossible terrain and just got better and more civilized as the years passed. Want to tackle the Sahara desert, jungles or the Australian outback? The Land Rover will do just fine. And then some. This 2021 Toyota Land Cruiser Heritage Edition will ford water 27 inches deep and tow up to 8,100 pounds.

Powering the Land Cruiser is a brawny 5.7-liter V-8 with 381 horsepower. The 401 lb-ft of torque is delivered at only 2,000 rpm. The 0-60 mph time is an estimated 7 seconds — not bad for such a huge vehicle — with power delivered through a smooth 8-speed automatic transmission. Estimated fuel economy is very low, at 13 City / 17 Highway mpg. I got just 7-8 mpg during an even mix of city and highway driving in the congested Chicago area.

However, only 87-octane fuel is called for despite the engine’s rather high 10.2:1 compassion ratios. Still, an owner might wish that the gas tank is larger. At 24.6 gallons, you will have to fill up often.

Such fuel economy shouldn’t be all that surprising because the Land Cruiser Heritage edition weighs 5,715 pounds. It’s fairly easy to maneuver, even though it is 194.9 inches long. It’s also 78 inches wide and has 8.9 inches of ground clearance. You get an easily removed roof rack, but it causes some wind noise despite the quiet interior, and the extra height can create problems in parking garages.

My test Land Cruiser’s steering was quick but rather heavy. The ride was smooth on most regular roads, although some sharp bumps could be moderately felt. There was no opportunity to take it off road.

You can’t get Android Auto or Apple CarPlay, but there’s plenty of good stuff. It includes a 14 speaker JBL sound system, wireless charging pad and a 360-degree camera view. And there’s a starter button and switch or knob for every function. There’s also a generally informative 9.0-inch touch screen infotainment system.

The Land Cruiser seats four adults comfortably, or five if they don’t mind the stiff rear-seat middle section. An optional third-row seat can seat three others, but only children fit comfortably back there. Cargo room is decent and goes to an impressive 82.8 cubic feet with the second- and third-row seats folded. My test Land Cruiser had only two-row seats and getting to a third-row seat would be a hassle.

The 2021 Land Cruiser is the last of its series. It is celebrated by the Heritage Edition, which doesn’t have the running boards of other Land Rover models, as a tribute to the original, smaller FJ40 Land Cruiser. However, the step-up to the interior of the 74-inch-high Heritage Edition suggests that running boards would be appreciated. Other special Heritage items include a black-accented grille, 18-inch copper-color forged aluminum BBS wheels and bronze-color interior contrast stitching.

Safety features include adaptive cruise control, lane departure warning and blind spot monitoring with cross-traffic alert, besides lots of air bags, even those for the third-row seat.
Verdict: A good SUV for people who know exactly what they want

The Land Cruiser hasn’t been changed much since 2016, when it got revised exterior styling and an 8-speed automatic transmission replaced a 6-speed unit. It still has old-school but solid body-on-frame construction, and houses an outdated infotainment system. Don’t expect any of those elements to change soon, though, as this is the last year for the current Land Cruiser generation. Toyota won’t say when or if a newly designed model will arrive for the U.S.

Besides the newly available third-row seat, other new items for the 2021 Heritage Edition are Classic Silver and Magnetic Gray metallic paint. Blizzard Pearl is a $425 option, and with both that and the third-row seating, the final price rises to $91,205.

No matter what the color, the Toyota Land Cruiser Heritage Edition seems destined to be a collector’s item, long after years of adventuresome use.